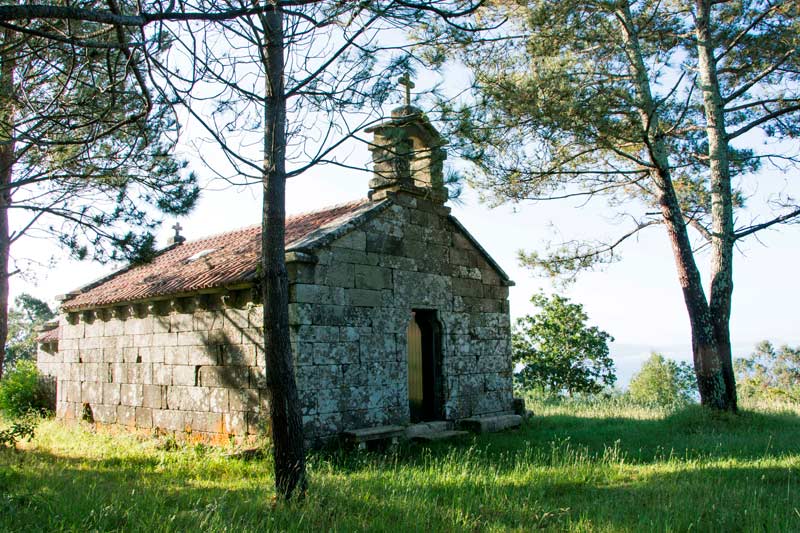 Religious practice in Muros led to other small temples being built throughout the parish. They help us to understand the nuances of maritime devotion.
Capilla de las Nieves (Chapel of the Snows).
Built in the 18th century, beside the so-called Holy Spring on the hillside of As Neves, the chapel is unique because of its surroundings and its outstanding views. It is in fact a hermitage, to which a porch giving access has recently been added. The villagers traditionally go to the spring since it is believed to have miraculous powers.
Chapel of San Roque.
There is record of its existence from 1609, but its present appearance is baroque, in the style of the second half of the 18th century. It is composed of three distinct spaces: nave, sanctuary and sacristy. It hosted a brotherhood, whose chaplain was a canon of the Collegiate.
Capilla del Espiritu Santo (Chapel of the Holy Spirit).
An old Gothic hermitage. The interior of the building is divided by arches which support a pointed barrel vault. The original small and primitive construction was enlarged in the 1920s using material from the ruined chapel of St Cross.
Documents from the 18th century allude to the presence of a hermit who ‘sheltered’ in an adjoining house and subsisted on a vegetable garden. Both house and garden belonged to the hermitage.
Capilla de San Marcos (St Mark’s chapel).
Situated in the woods and recently refurbished, an annual pilgrimage picnic is once again celebrated here. According to an inscription over the doorway it dates from 1480, although the form is Romanesque, a barrel vault being the main structural element. On the exterior are corbels, representing scrolls, triangles or animals. Two decorative elements are of particular interest: representations of flattened faces in the shape of the moon.